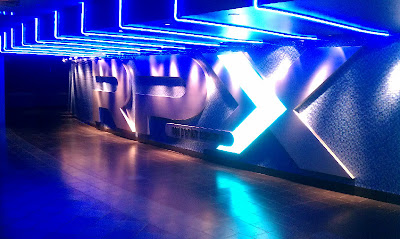 Mike: Last year, we told you about our underwhelming experience with AMC's ETX - a premium theater experience that's supposed to rival IMAX. We tried ETX at the AMC Empire 25 in Times Square when we saw the fourth Pirates of the Caribbean film. Regal has a similar gimmick - theirs is called RPX, Regal Premium Experience. And recently, we finally got to try it and see how it compares to ETX.

Now, we hope to have another feature for you sometime in the future where we compare a handful of IMAX screens to AMC's ETX and Regal's RPX, to see which ones are good and, more importantly, which ones are worth it. But before we put that together, we want to visit some more IMAX screens and also re-visit ETX, if only to see if AMC fixed the jagged screen.

If you've read some of our reviews, it's clear that we're pretty high on AMC. We really like their Stubs program, their Gold and Silver discount passes, the AMC Healthy Snacks, and particularly their pre-Noon matinee pricing. But we thought ETX was kind of a rip-off and dubbed it 'an Excuse To charge Extra.' We tend to stay away from Regal Cinemas - the UA Court Street 12 situated just blocks away from us is usually a zoo, and we hate that there is no matinee pricing for Regal's Manhattan theaters. So we don't go there very often, but lately we've made a number of visits to Regal's Time Square theater, the E-Walk 13. We'd wanted to try the ETX screen there, and when 21 Jump Street was playing finally decided to check it out.

I should preface that while I'm usually able to tell if something looks and sounds good, I'm by no means an expert. I'm pretty easy to satisfy in the sound department - as long as it's able to play loud enough and there are no noticeable defects, I'm fine. I don't care for the super loud sound with the rumbling walls. In terms of the screen, I think it's important that it's properly framed. I can't stand it when something is slightly off, which happens way too often. Big is nice, too. And it bugs me when the image isn't bright enough. I don't have a discriminating eye for that stuff, but I can usually tell when something's off. 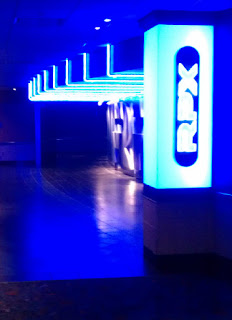 After watching 21 Jump Street in Regal's E-Walk RPX, I can say - it's very nice. Starting with the auditorium's entrance, Regal has very effectively branded this as a special screen, and it's pretty cool.

The screen inside is pretty big, but not noticeably bigger than some of the other screens at the E-Walk. The leather seats seemed roomy and comfortable, and it was very clean. Again, even inside, there's RPX branding everywhere - all across the walls and even on the seats. A loud introduction demos the sound before the feature - at first I was worried that I'd have to sit through this loudness for the next 90 minutes, but never did the volume of the movie meet that of the intro, thankfully.

I should note that we didn't see a movie here on a Friday or Saturday night. I have no idea whether there is any audience experience control from Regal. The audience was fairly quiet when we saw a movie on a Tuesday night after opening weekend.

But is it worth it? I don't know. I was more impressed with this presentation than I was with AMC's ETX. But would I pay $20 to see a movie here instead of on a regular screen for a lot less? Absolutely not. And I didn't - we got these tickets for $5 each. RPX has the same approach as ETX - take the biggest screen, fix it up, install the highest number.1 available sound system, get good projectors, make everything look nice, and charge more. Except RPX is doing a lot more to sell it. The showmanship is a lot more impressive. Plus, whereas I had some issues with ETX (particularly the screen), everything looked good and sounded good on the RPX screen. I had zero complaints. If there's a movie that I'm really looking forward to seeing and I want to make sure I want to see it in the best available presentation, then I'd absolutely go see it at RPX. But what I'm really interested in is RPNJOAX, the Regal Premium No Jerk-Offs Allowed Experience, where obnoxious talkers, smartphone users, and any and all cinema offenders are promptly removed from the theater.